Scary moments on the Mentawai

The Mentawai. The tropical islands in the Indian Ocean where every surfer dreams of going. With the most beautiful waves in the world! And I got the possibility to go there. Wowwww!! Isn’t that amazing.

But before I went there, I was going back and forward between my feelings of excitement and feelings of fair. ,,Don’t die out there, ok’’ a friend of mine said. ,,Please, be safe.’’ Two Australian guys, that I met on the island of Simeulue, made it worse. ,,Are you sure that you want to surf there? In the Mentawai you will only find heavy and nasty barrels. Are you up for that?’’

Because of all these comments I almost decided not to go, but Ian, one of the owners of a surfcamp on the Mentawai, convinced me to go after all. He said that besides the heavy reef breaks there, there are also more protected spots and that it would be fun to surf those waves. 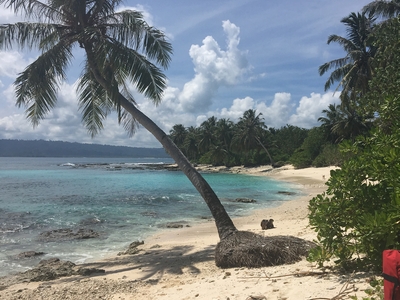 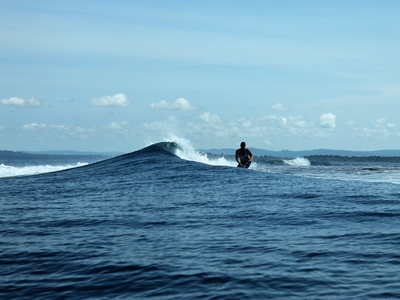 Well, the travelling from the island of Simeulue to the most southern island of the Mentawai (Sibaru) was a nightmare. If you go travelling in Indonesia, don’t expect to travel easy and quick. It took me 2,5 days to get from Simeulue to the Mentawai. In short: one flight with a small propeller plane from Simeulue to Medan, a flight from Medan to Padang with a lot of waiting on the airport and 6 hours by boat to get from Padang (Sumatra) to Sikakap. Well, I sail catamarans in Holland, but I am not used to these kind of waves. Because of the bouncing and the turbulence of the boat I threw up 5 times and the most of the time between Padang and Sikakap I was lying flat on the floor of the boat. It was probably not in the best shape to arrive on the Mentawai but hey, I was there.

Eric, the other owner of the surfcamp, picked me up from the boat and he immediately showed me a good surf spot, called Roxies. Roxies is a fun and easy wave, but if it gets bigger than 6-8 foot its transforms in a heavy barrel. I decided to go for a surf anyway to experience my first surf session in the Mentawai. Well, it was good to be out there, but it wasn’t easy. The waves were pretty fast (closing out or just barrelling, just how you see it) and my weak condition after throwing up 5 times, didn’t make it any better. After another bumpy ride on Eric’s boat, I was glad to arrive on the small island, where his surfcamp was located. 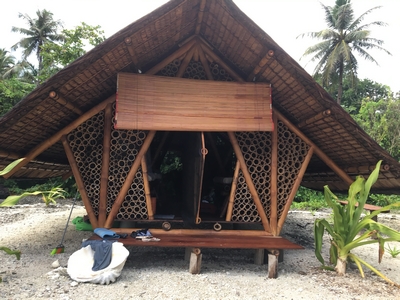 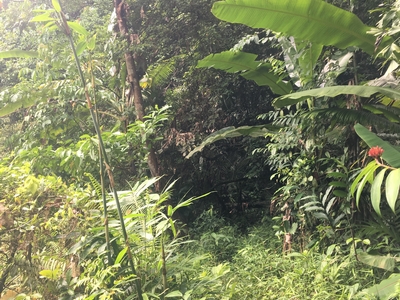 Eric’s wife gave me a wonderful meal and I was happy with that. But then adventure for me begin. At least in my perception. The surfcamp is located on a small island, with nothing there but the surfcamp itself, which is made of 3 wooden huts and a kitchen. It is a beautiful place with palm trees, white beaches, a heavy surfbreak called thunders and a lot of jungle. It is beautiful, but personally I also found it a bit scary to be so far away from civilization. It takes 60 minutes to get from this island to Sikakap (the first real village), so if you need any medical help, you need to be sure that you don’t need it immediately. Eric is a smart guy and he is pretty handy guy, but I thought it was not a smart idea to be totally dependent of him.

They have built two beautiful huts on the island, where you can sleep in. The huts don’t have a real door though (only a net) and that made me think as well. There I was, lying on my bed, in a small hut with the jungle next to me. I am born and raised in Amsterdam (in Holland) and I am not used to the Indonesian jungle. How could I be sure that there weren’t any snakes that wanted to come in? Besides all the mosquitos which were present, I spent some time thinking about all the other animals that could come in. It was a beautiful hut, but I saw a rat passing by in my hut and my bag with valuable stuff was run over by ants. For a long time I couldn’t fall asleep. To be honest, I was too afraid to fall asleep.

I read for a couple of hours and in the end I called my best friend. I was crying! She told me that it would all be okay and said to me that I should do what was best for me. I gave it some thought and the next morning I decided that it would be better to find another place in Sikakap. Eric and his wife were very nice people, but I didn’t feel safe out there. Besides all their good efforts to make me feel at home there, I didn’t want to stay there. I did not want to be dependent on one person to get me in to safety when there was trouble. And I did not want to have to travel 60 minutes with a small boat to see a doctor. Besides all the animals, that was the main reason to leave. I felt bad for Eric and his wife, but I also felt that it was my own responsibility to feel safe. 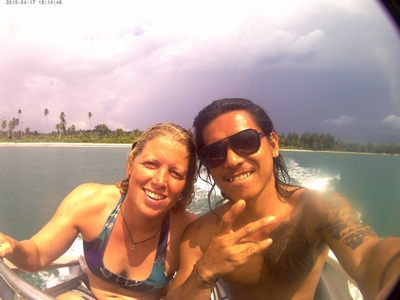 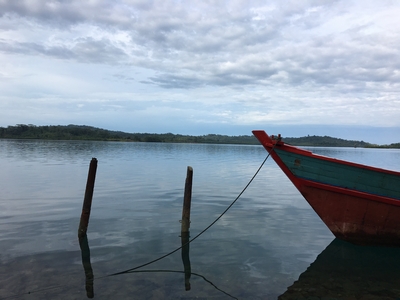 After some searching I found a nice homestay called Oinan’s, which is located next to the river in Sikakap. They are still redecorating Oinan and it is not the most fancy place where you can stay in, but at least it was safe! Reno, the owner, and his dad are two lovely guys from the Mentawai, who immediately gave me a very warm feeling. They made me feel at home. Besides that it was also nice to have my own room (with a lock on the door) and to stay in the small local town called Sikakap.

On my next blog I will write about the surf in the Mentawai.

Come surfing with us in Portugal and Morocco!